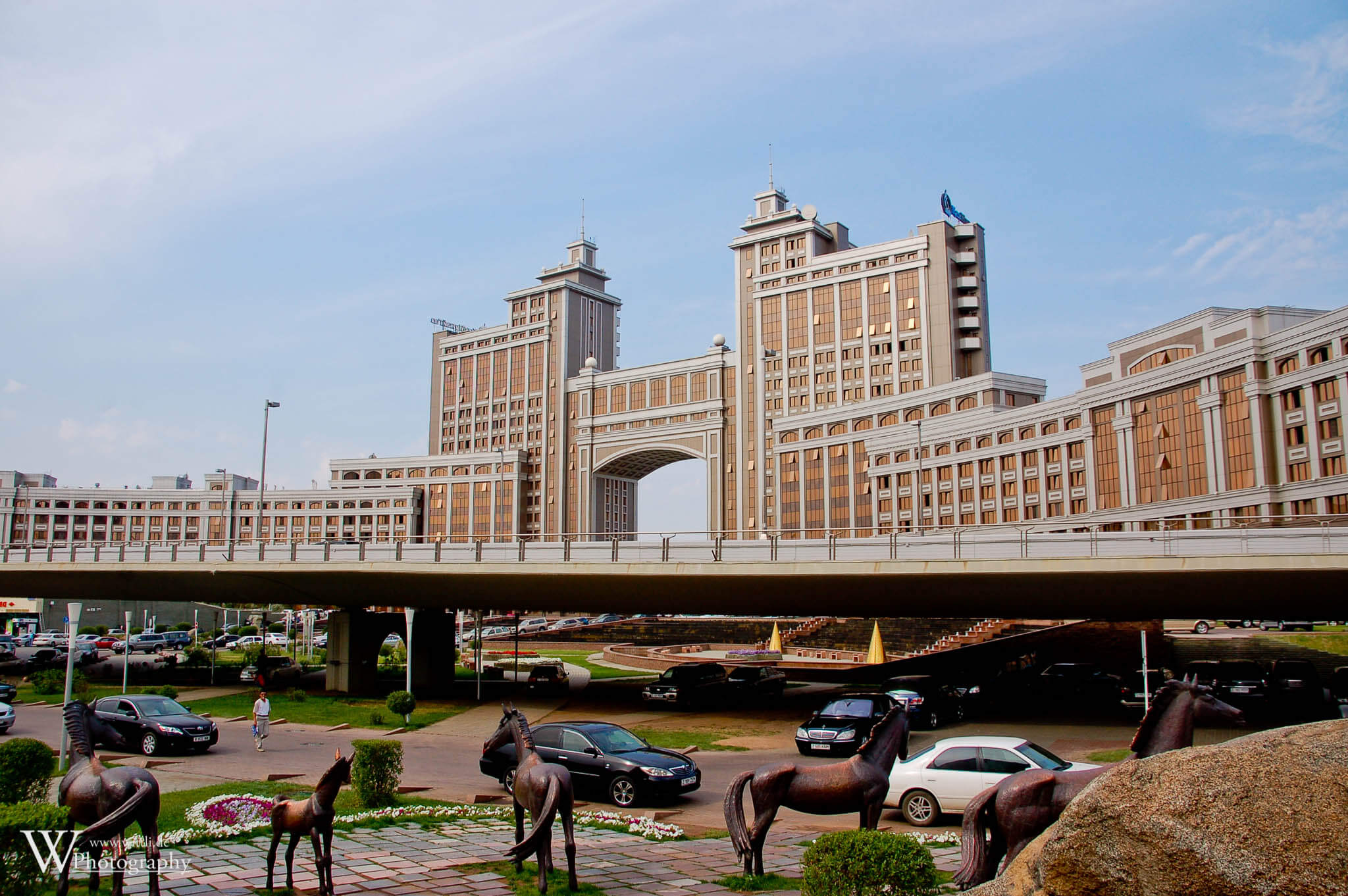 My second visit to Central Asia in 2008 started in Kazakhstan and brought me from there to Kyrgyzstan, Tajikistan, Uzbekistan and Afghanistan. As I needed to see something else besides Central Asia I finished the trip in India, my plan to visit Pakistan unfortunately failed.

The city I am visiting is impressively big for just celebrating its 10th anniversary. Or at least this is what the Kazakh government wants you to believe. In fact, the place was founded 178 years ago under the name of Akmolinsk. Later it was known as Zelinograd and then renamed to Aqmola, a kazakhified version of Akmolinsk. As it was made the new capital city of Kazakhstan and the name changed to Astana it already had about 350,000 inhabitants. Since then, a new government quarter has been built and the population has nearly doubled (by 2019 it has tripled and the city was renamed again, Nur-Sultan is its new name). Nurshol-Boulevard is the new pedestrianised show-off street and the most important buildings are already finished. On one end the boulevard is anchored by the Ak-Orda (Presidential) Palace, on the other end you find the headquarters of KazMunayGas, Kazakhstan’s state-owned oil and gas company and the source of financing for all the construction. Conveniently, KazMunayGas has a big arch prolonging the boulevard to the under-construction Khan Shatyr Entertainment Center, resembling a 150m high tent designed by Norman Foster. Prominently located on the boulevard is the headquarter of the ruling Nur-Otan party and next to the presidential palace is the Kazakh Parliament. Nur-Astana Mosque is a bit removed from the axis of power. The Baiterek Tower overlooks the whole scene.

In all Central Asian Soviet republics, a new generation of young leaders had come into power in the final years of the Soviet Union. After the breakup, most of these “First Secretaries” seamlessly transitioned into the post of president and stuck with it. Kazakh leader Nursultan Nazarbayev is as much an iron-fisted autocrat as his fellow presidents but does at least show a certain competence in office. On my previous visit to Central Asia in 2003, I had found a region in decline where a strong majority longed back for the better days of the Soviet Union, where most men with knowledge and experience had gone for work to Russia… or to Kazakhstan. The moderate oil and gas income coupled with a generally sensible economic policy make Kazakhstan far better off than its neighbours. It shows in the statistics, in per capita income (adjusted to Purchasing Power Parity) Kazakhstan is close to Russia and far ahead of its neighbours Kyrgyzstan and Uzbekistan.

For perspective I added a few more countries and just for interest, I have added the numbers for 2018 as well. Source: IMF World Economic Outlook (WEO) Database

I am fairly impressed by what I see in Astana and I do think that it is one of the few instances where relocating the capital was a smart move. Kazakhstan is a big country and can easily take another metropolis besides (earthquake threatened) Almaty and it will benefit the country if not all activity is concentrated in a small corner in the southeast.

My next stop is beautiful lake Burabay a few hours to the north. The lake is popular with the new elite from Astana and all locals seem to rent out spare rooms in their houses. I end up in the small house of a lovely lady. From nearby Shchuchinsk I take the train to Karaganda, a town that is linked to the Karlag (Karaganda Corrective Labor Camp) Gulag which held over a million inmates from the 1930s to the early 1950s who were forced to work in agriculture or the nearby coal mines. The old Karlag administration building is located in the non-descript village of Dolinka. A small museum has been established in a nearby house, I need to find the guardian, he asks me to have a quick look only, he needs to go. The administration building has been promised as the site of a future museum but now the government seems to be backtracking, the windows and doors have recently been bricked-up.

On the train, I get the first real glance of the Kazakh steppe, a vast expanse of nothingness. Early in the morning a snowy mountain chain appears. Almaty is close, the city is at the foot of these mountains. It lacks the grandiose new buildings of Astana but it has more atmosphere and is still the beating heart of Kazakhstan. The location is beautiful, Almaty basically sits on an inclined plane that rises from 500m to 1,700m towards the 4000 metre mountains that begin right at the edge of the city. 4979m Pik Talgar is only 40km away. I get a Pakistani visa in Almaty, the process is painless and the pricing interesting. I apply with a girl from Singapore and a guy who cycled to Kazakhstan from the UK. They charge the girl 12$, me 36$ and the British guy 156$. As he complains the consular officer coolly answers “that is the amount the UK charges us to come”.

I head to the mountains the next day, the scenery is beautiful but I nearly lose my camera as the whole camera bag starts rolling down a steep slope where I carelessly put it. Fortunately, one of the few bigger stones stops the bag. Besides that, I have bad timing, the trip takes longer than expected and I have to descent the last bit in near darkness. I am glad as I reach the road. An Almaty businessman with his fancy BMW takes me back to town, as I tell him, that I live near Stuttgart he exclaims, “the home of Mercedes”, besides the BMW he has one as well. Shymbulak is Kazakhstan’s attempt at a fancy mountain resort. Swiss-style chalets dot the streets.

The minibus drops me on the main road in the midday heat, we arrived later than expected as we took a break of an hour so that everybody could do some shopping at the roadside market. I put on my heavy backpack and start walking. It is 12km until Charyn Canyon but reputedly it is worth the effort. There are few cars going that way but I am not trying to stop them, I have time, I have food, I have water, I can walk. Suddenly a bus appears, I just keep walking but the bus stops right next to me and I can hear the sound of the opening door. A cheery, grey-haired man is looking at me and asks one of the best questions I have ever encountered: “Are you coming with us or do you want to do it the extreme way?” I get in. It turns out to be a tour bus on a day-trip to the canyon from Almaty. The tour guide is extremely friendly, he even pays the National park entrance fee for me and refuses my attempts to reimburse him. I can leave my bag in the bus and he asks me to come along as he shows the group around. Charyn Canyon is indeed beautiful but reveals its full beauty only in the evening when the day-visitors are gone. I put up my cheap tent and soundly sleep during the night.

The next day I spend some time with the guards at the entrance to the National park, I try to hitch a ride but my timing is bad, a fair number of cars is going in but none going out. They are open and friendly, I stayed the night, I am already something like family. The pattern of corruption is interesting, they never propose to someone to pay less than the full price but when offered by the visitors, which quite a number do, they take the offer. After an hour-and-a-half of waiting some Irishmen with their cars take me to the main street. A shared taxi brings me to Kegen and the driver is very helpful to organize my onward travel to Kyrgyzstan as I take a little frequented back road. Soon, I find myself in the back of a vegetable truck, the only transport that we could find crossing the border.

My second visit to Central Asia in 2008 started in Kazakhstan and brought me from there to Kyrgyzstan, Tajikistan, Uzbekistan…

Churches of Kraków In February 2008, a university excursion brought me to Kraków (as well as Berlin, Leipzig, Wrocław and…

Northern Chile - visited May 2014 - Elqui Valley On my way north, I stop at the beautiful Elqui valley…