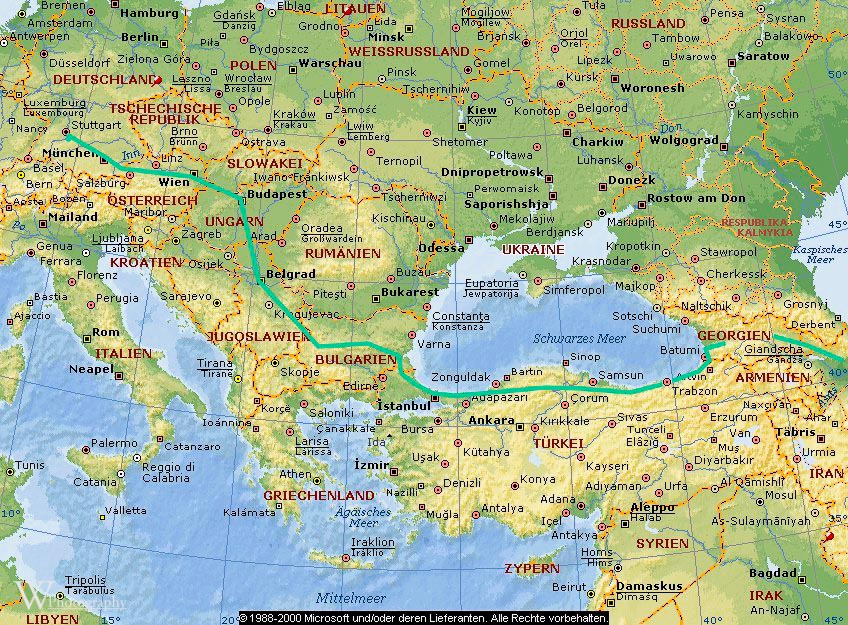 In the autumn of 2003, I took a three-month trip travelling back to Germany from Hong Kong overland via mainland China, Kyrgyzstan, Uzbekistan, Turkmenistan, Iran, Azerbaijan and Georgia. In mid-December, I had only reached Georgia and had to make a decision how to get back in time for Christmas. I wanted to travel overland so flying was out of question. I had to hurry up and my decision was logical, speed through Turkey, Bulgaria, Serbia and Hungary quickly by taking as many night trains as possible.

A word of warning. The quality of my pictures from this trip is bad, I was a horrible photographer and I had an early digital 3,3 MP camera. Due to a shortage of memory cards I set the resolution down to 1 MP, what a mistake. Taken as memories from this trip, they are still quite enjoyable.

Turkey works like a breeze. I took a small bus from the border to Rize, there we switch buses on the highway as a bus to Trabzon just had left the station. At Trabzon’s bus station I am asked where I want to go next the moment I step out of the bus. “Istanbul”. “Come here.” “Can I pay with US dollar?” “Yes.” The bus leaves the station and the next day around noon I have reached Istanbul. I haven’t had time yet to even change money, I payed everything with US dollars so far.

It is cold and it is rainy and somehow Istanbul fails to work its magic on me. Logically, I am seeing amazing things, Hagia Sophia, the Blue Mosque, the Basilica Cistern or the Topkapi Palace but somehow, they leave me unfazed. Maybe my mind is still in Georgia. Istanbul will be the last place where I stay for the night and sleep in a real bed. The next stops go quickly, night train to Dimitrovgrad in Bulgaria, two hours waiting there, on to Plovdiv for the afternoon (nice town, nice Roman theatre) and another train to Sofia. People smoke everywhere on local Bulgarian trains. Short walk around town and I am on the night train to Serbia. Belgrade is a beautiful city, in the military museum remains from a NATO bomb from the 1999 Kosovo campaign are exhibited. I have a late train so there is time to go to the National Theatre to see one of my favourite ballet performances, Romeo and Juliet by Prokofiev. There is a metal detector at the entrance and it beeps like crazy as I pass. I visited so many countries in the last days that I just threw all the coins into my small backpack. A security guard takes me with him and goes through my belongings. Very professional, he even closely examines a chocolate bar I have with me. I never have the feeling that he is interested in my money or taking anything from me. After my dealings with Central Asia and Caucasus police this is a relief. Unfortunately, the ballet ends at half-time as one of the lead dancers sustained an injury.

To my surprise, I am alone in my comfy two-bed compartment to Budapest, the capital of Hungary. It is an amazing city but it is hazy and the clouds hang deep today. I go to one of the famed baths, it is my third day on the road without a proper shower. A night train to Munich and another train home. Time to get the Christmas presents ready.

Back from China Overland: Georgia

Cycling Norway In August 2009, together with my friend Hannes we headed to Norway with our bicycles. The terrain is…