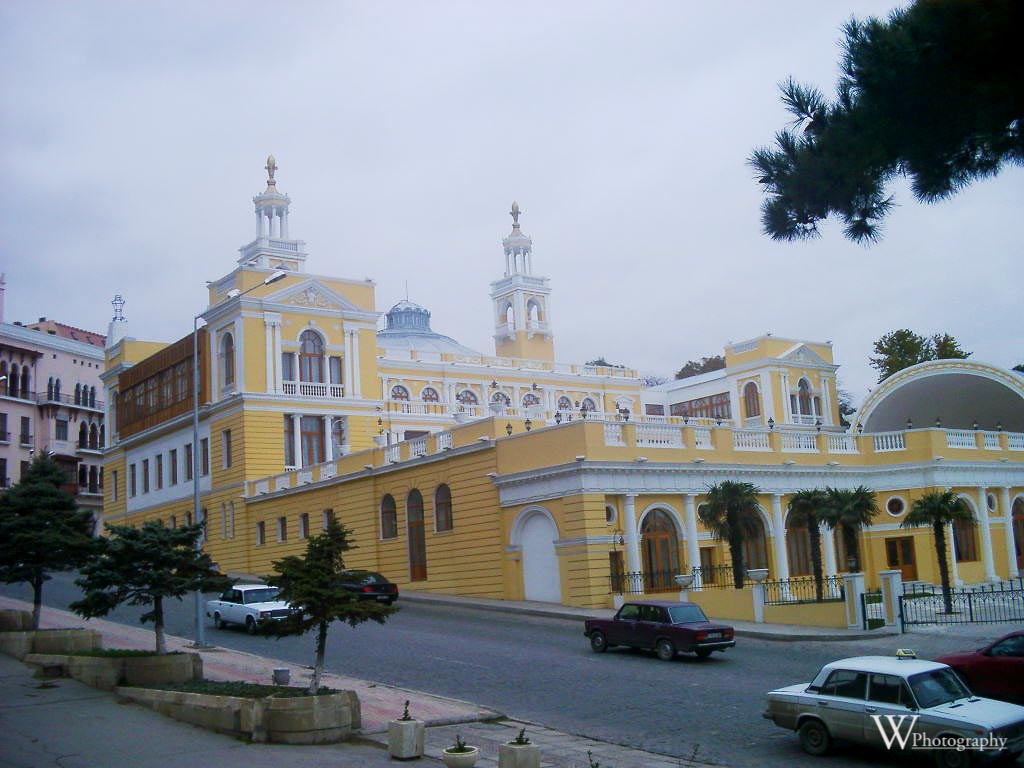 I visited Azerbaijan in 2003 on a three-month trip travelling back to Germany from China overland that also brought me to Hong Kong, Kyrgyzstan, Uzbekistan, Turkmenistan, Iran and Georgia before ending in a Mad Dash Home to make it back in time for Christmas.

A word of warning. The quality of my pictures from this trip is bad, I was a horrible photographer and I had an early digital 3,3 MP camera. Due to a shortage of memory cards I set the resolution down to 1 MP, what a mistake. Taken as memories from this trip, they are still quite enjoyable.

I arrived to Azerbaijan by bus from Tehran in what was and still is the weirdest bus ride of my life. It started normal, I came to the bus station, went to the company I had bought the ticket from and they pointed me to a bus. The weirdness started when I realized that I was to be the only passenger and not just for the beginning but for the whole journey. This normal-sized bus had two drivers but just one passenger. I have no clue why the ran this bus anyway. Maybe they smuggled something, the cargo hold was full and the last rows of the bus as well. The only thing I ever saw were plastic food boxes, hardly a thing that would be worth smuggling. What they did smuggle was petrol, we filled up on cheap Iranian petrol at the last station before the border and some time after the border the petrol was pumped out of the tank. But that can hardly justify the expense of the trip especially given the fact that after the border you still have to go one third of the way to Baku. Maybe there are special tax arrangements for buses? Be it as it is, we were checked at the border and everything seemed fine. The drivers were nice but they didn’t speak any English and one of them sang during the night, he sang beautifully, but loud and he did this for hours. Probably Shiite religious songs as “Ya, Ali” was a recurring theme and the only thing I understood. Imagine riding through the night, as the sole passenger of a bus and the driver singing loudly.

I never got really warm with Azerbaijan. From all the countries on this trip it is the one I would be least interested in visiting again. Which is a bit unfair, Baku is an interesting city and Azerbaijan has its share of attractions, it is just that many of them are a bit difficult to get to. Maybe the negative tone was set at the check-in at my hotel. They guy asks me which country I am going to next. “Georgia”, “Are you also going to Armenia?”, “No, I’m not going to Armenia”, “Good, they are our enemies.” He says this with a hatred in his voice that I have never experienced before in my life. It’s true, I’m not going to Armenia but not because I do not want to (I’d love to) but because I don’t have time. And having enemies is something to avoid.

I meet Gavin (with whom I travelled in Kyrgyzstan) again who has since befriended a bunch of weird Saudis. They are all in their twenties, have Russian mothers and say they can’t stand Saudi-Arabia. They wanted to be in a Muslim country but one where they could drink alcohol and chase women, so the moved to Baku. They all speak Russian as a second mother language. And drinking alcohol they do, every day, I think. We head out to the mud volcanoes and the petroglyphs at Qobustan. Baku is an interesting mix, some old buildings, a fair number of high-class art deco architecture was built as the first wave of oil wealth swept through the town in the early 20th century. The first signs of the new oil wealth start to appear. Comparing it to Turkmenistan the income derived from natural resources seems to be better used here. But Turkmenistan is not a country you want to compare yourself with. One day I head out of Baku to some semi-abandoned oilfields. All is full with derricks and drilling towers, all is polluted with oil, lakes have formed. From Baku we head to Shaki and from there cross to Georgia.

Politically, the time of my visit is sensitive. Long-time strongman Heydar Aliyaev’s health is failing, he is fighting death in a hospital in the United States. His son Ilham has just won the neither free nor fair election to succeed him.

I’ll add another story here that happened years later in 2010 at the Munich Security Conference. I think it is a good illustration what kind of person is running Azerbaijan. President Ilham Aliyev was one of the most important guests and energy security was the topic of one panel. A few days before the conference the Azerbaijani embassy informed us that his wife wants to attend as well. A very unusual request at this invitation-only working conference. As he was an important speaker we agreed, we needed her picture, her name and her date of birth. The picture arrived first and we all thought that he had married a beautiful young student but the birth date showed that she is about the same age as him. The next day the request came that she needed to be in the room while he was speaking, and the day after that she would need to sit next to him. At this point it is important to know that the seating order is a delicate issue at these conferences that sometimes leads to diplomatic trouble. The general rules are clear, the position is the first marker and between all the president seniority determines who is to sit where. Wives aren’t supposed to be included in this calculation and she was the only wife at the whole conference. When the panel started, lovely Ilham wasn’t there, he was deliberately late by a few minutes and he also wasn’t able to enter the room through a side door. The proceedings had to be stopped, the main door next to the stage lifted up so that he could enter with his wife at his arm. Absolutely pathetic, the little president and his grand entrée.

Back from China Overland: Georgia

Back from China Overland: Iran

Colombia - visited July/August 2014 - “It’s a problem of the past, there used to be robberies of buses but…